The second and third houses rule the ears. The second house rules the outer part of the ear and third house rules the inner portion. Jupiter is karaka for all troubles and diseases concerning ears. Again, second and third houses rule the right ear, while twelfth and eleventh houses rule the left one. In the natural zodiac, Brisha and Mithuna rasis rule over the right ear, and Meena and Kumbha rasis rule over the left ear. Saturn has also a role in causing deafness. When the above houses, their lords and karaka planets ruling ears be afflicted and be in any way related with the disease inflicting planet or house, they produce trouble and disease in the ears. Afflicted or malefic Mars in the houses ruling ears or affliction of the houses ruling ears by aspect of malefic  Mars give rise to tumours in the ears. As ears are the organs of hearing, the airy houses Mithuna, Tula and Kumbha rasis have also some thing to do in the matter of hearing and ear diseases. Jupiter is karaka for both tongue and ears and affliction of Jupiter together with second house and other houses and planets ruling tongue and ears give rise to both dumbness and deafness. When strong malefics pass through these houses in transit or afflict them by aspects, they give rise to pains and diseases connecting tongue and ears. 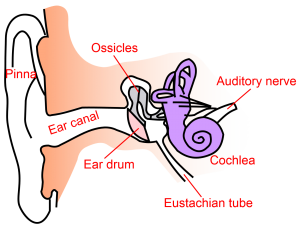 I am giving below some of the combinations for diseases connecting ears :—

lagna—Makara ; Ketu in Simha ; Mars and Saturn in Kanya ; Venus in Tula ; Sun in Brischika ; Mercury in Dhanu ; Moon and Rahu in Kumbha ; Jupiter in Meena.

This is a case of deaf and dumb. The reasons are :—