Saturn rules over skin. Moon rules the  diseases of skin. Affliction of these planets, affliction of Saturn or Moon by malefic Sun and Mercury, situation of all these planets in evil houses. Conjunction with evil lords and malefics, and a relation of them with Kanya rasi, sixth house, lord of sixth house or with disease-inflicting house or planet, all these give rise to itches and skin diseases. Mars also gives rise to skin diseases and his affliction over the planets ruling skin is not desirable. When Mars is afflicted he also produces skin diseases. 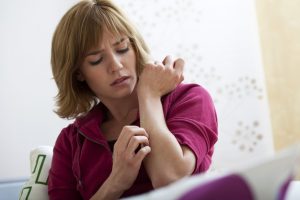 Lagna—Meena ; Sun, Moon, Mars and Venus In Karkata ; Mercury and Rahu in Simha ; Saturn in Kanya ; Jupiter in Tula; Ketu in Kumbha.

This is a case of skin disease. The person suffered from the same for a long time.

Thus we find the reasons to produce skin disease and corrupt state of blood are present in this horoscope.