All glands are ruled by Venus. Mars is karaka for all diseases concerning head. Sun is also a karaka for head. Lagna, that is first house rules the head. Mesha rasi, first house of natural zodiac is the seat of head. Thus we find lagna, lord of lagna, Mesha rasi, Venus, Mars and Sun work for the diseases concerning pituitary gland and affliction of the above places and planets by malefics, situation of Venus, Mars, Sun and lord of lagna in evil houses, conjunction of malefics and lords of evil houses in lagna or Mesha rasi and some relation of the above planets and houses with sixth house, lord of sixth house, Kanya rasi or with disease inflicting planet may give rise to diseases concerning pituitary gland.

As Venus is mainly responsible for all glandular diseases, her affliction by malefics or adverse situation and some relation with sixth house, lord of sixth’ house, Kanya rasi etc and also some relation with lagna, lord of lagna, Mesha rasi or lagna karaka is essential to produce  these diseases. 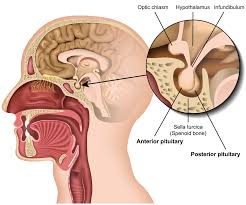 Lagna — Makara ; Rahu in Brisha ; Sun and Moon in Mithuna ; Venus, Mercury and Saturn In Karkata ; Mars in Simha ; Jupiter in Kanya ; Ketu in Brischika.

This is horoscope of a person suffering from pituitary gland tumour.

Thus we find lagna, lord of lagna, Mesha rasi, Sun, Mars, Venus, all are afflicted and situated in evil houses, related with sixth house and sixth lord and thus are capable of giving rise to diseases concerning pituitary glands.