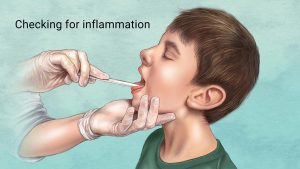 Diphtheria is an acute infectious disease with inflammation of mucous membrane, especially of throat. The causes of this disease are to be looked out from third house, lord of third house, Mithuna rasi, Venus, Mars and Rahu. Affliction of third house, Mithuna rasi or lord of third house by Mars and Rahu, by conjunction, aspect etc, are important factors to produce this disease, Affliction of karaka Venus by Mars and  Rahu may also give rise to the similar diseases. When Mercury joins the above combinations, the infection comes from school, business place, place of amusements etc ; When Mars joins them it is infected from brothers, sisters, hospitals, battle fields etc ; When Saturn joins them it is from people in street, factory workers, low-class people etc and so on according to the nature and qualities of the karakatas of planets.

Pharynx is the cavity with enclosing muscles and mucous  membrane, behind and communicating with nose, mouth and larynx. The affection of same gives rise to the diseases of Pharyngitis. The third house, lord of third house, Mithuna rasi, and Venus rule this disease, When above houses, house-lords and planets ‘become afflicted and be in any way related with disease-inflicting planet or house they produce the said disease. When afflicted, malefic or sixth lord Venus afflicts third house, Mithuna rasi or lord of third house by conjunction or aspect etc or when afflicted Venus be in dusthana or in kanya  rasi with the lord of third house and Mithuna rasi or third house be weak, they produce the same disease, When fourth house or lord of fourth house or Karkata rasi or Moon be weak or afflicted or be conjoined with or be aspected by malefic or evil lord and in anyway be related with the above combinations causing the diseases of pharyngitis, they give rise to worst type of pharyngitis.

The affliction of third house, Venus, Mithuna rasi, lord of third house by strong and afflicted Mars and Rahu give rise to tumours in throat and neck. When all malefics strongly aspect or connect third house, third lord, Mithuna rasi and Venus and be in anyway related with disease-inflicting house or planet, they produce cancer of throat. To produce any disease in neck, affliction of the eleventh house is also necessary.

I am giving below some of the combinations to produce diseases in throat :—

Lagna—Tula ; Mars in Brisha ; Saturn in Mithuna ; Rahu in Karkata ; Jupiter in Simha ; Moon and Venus in Kanya ; Sun and Mercury in Brischika ; Ketu in Makara.

The jataka suffered from bad Tonsillitis and underwent an operation.
The reasons for the disease are :—

Lagna—Mesha I Moon in Mesha ; Venus, Mars, Sun, Rahu and Mercury in Mithuna ; Jupiter In Karkata ; Ketu in Dhanu Saturn in Meena.

This is a case of Diphtheria.
The reasons for the same are:-

Thus we find the third house, lord of third house, Mithuna rasi and karaka planets are afflicted heavily by malefics and are quite capable of giving rise to disease like diphtheria.

Lagna—Dhanu ; Moon in Mesha ; Ketu in Brisha ; Jupiter, Mercury and Mars in Karkata ; Sun and Saturn in Simha; Venus in Kanya ; Rahu In Brischika.

This is a case of Pharyngitis. The jataka suffered from the same many times.
The reasons for the same are:-

Thus we find many factors are present in this horoscope to produce the disease of Pharyngitis.