Bones are ruled by Brisha, Kanya and Makara rasis and also by second, sixth and tenth houses. Saturn is karaka for the same. These houses, lords of second, sixth and tenth houses and Saturn work for all bone diseases. Rahu is the planet who is responsible for causing tuberculosis of bones, When Rahu is capable of causing tubercular disease in a horoscope and also at the same time afflicts the houses and planets ruling bones or be in any way related with them and is connected with disease inflicting planet, it may give rise to tuberculosis of bones. The place of disease in the body will depend where Rahu is aspecting malefically or the house with lord of which Rahu is conjoined or the place ruled by the planet as karaka with whom Rahu is associated. When such conjunction or aspect in anyway connects the second house or second lord, it may give rise to disease in the right leg ; if it be with twelfth lord, the effect may be in the left leg. When Rahu be in any way connected with third house or lord of third house, it will affect the right hand or right collar bones when it connects the eleventh house, or lord of eleventh house, it will be left hand or left collar bone. Whether the same will be hand or collar bone will depend on the karaka planet. When fourth house or its lord be related, the disease will be of ribs in right side of chest and if it be tenth house or tenth lord, the disease will be in left side, and so on. 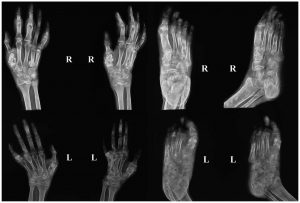 Lagna—Kumbha ; Saturn R in Mithuna ; Ketu in Karkata ; Mars in Simha ; Sun in Dhanu ; Mercury, Venus, and Rahu in Makara ; Moon and Jupiter in Meena.

This is a case of tuberculosis of ribs in right side. He was operated and affected bones were removed. The reasons for the disease are :—

Thus we find the planets and houses ruling bones are afflicted and related with a planet which is capable of producing tuberculosis.

—OTHER DISEASES CONCERNING BONES AND MARROW—

The second, sixth and tenth houses, Brisha, Kanya and Makara rasis and Saturn govern all diseases connecting bones. Affliction of the above rasis and houses, karaka Saturn and affliction of lords of second, sixth and tenth houses and any relation of them with disease inflicting house or planet give rise to the disease of bones. Rahu is responsible for all malignant growths. When Rahu joins the above houses and planets or aspects them or in any way afflicts them and be related with disease producing house or planet, it gives rise to malignant growth of bones. Ketu and Saturn are responsible for all pains. When any of them malefically joins or aspects the above combinations and be in a position to produce disease, they may give rise to pains in bones.

There are many kinds of diseases connecting the spinal cord, such as, affection of blood vessels, congestion, tumours of the cord, thrombosis, haemorrhage into spinal cord etc. Mercury rules the spinal system along with Tula rasi and seventh house. Affliction of Mercury, Tula rasi, seventh house and its lord and also affliction of houses and planets ruling bones, and their inter-relation and also relation with disease inflicting house or planet may give rise to diseases in spinal cord. The nature of the disease will depend on the planet or planets afflicting or conjoining them.

Marrow is soft fatty substance in the cavities of bones. This is also governed by the houses ruling bones. Mars is karaka planet for the same. Affliction of Brisha, Kanya and Makara rasis, second, sixth and tenth houses and their lords and also affliction of karaka Mars and a relation of these houses and planets with disease producing house or planet give rise to diseases of marrow. Watery signs also take part in this disease and a relation of the houses and planets ruling marrow with watery signs, that is Karkata, Brischika and Meena rasis is essential to give rise to the diseases concerning marrow.

Lagna—Brischika ; Ketu in Brisha ; Jupiter in Mithuna ; Saturn in Simha ; Moon in Kanya ; Sun, Venus and Rahu in Brischika Mars and Mercury in Dhanu.

This is a case of malignant growth of bones in the lower part of the spinal cord and in the region of groins. The reasons for the same are :—

Thus we find the houses and planets ruling spinal cord and groins are afflicted. They are strongly afflicted by Rahu suggesting malignant growth.