Mars and Mercury are the planets ruling over these diseases, When these planets are badly placed or afflicted they are liable to produce these diseases. When they are afflicted and are also related with sixth house or lord of sixth house, Kanya rasi or with any disease-inflicting house or planet, they give rise to small and chicken pox. In case of milder affliction or situation in evil house or conjunction with evil lords, they produce chicken pox. While they are heavily afflicted, badly placed or conjoined with evil lords, they give rise to small pox. Venus rule the lustre of body An afflicted Venus takes away the lustre of the body and face. Hence the strength and position of Venus is also to be judged. When Venus joins the combinations for these disease, she puts permanent marks in the body and face. Rahu is karaka for epidemic When Rahu joins the combination for disease or be in any way related, one is liable to be attacked from these diseases in result of an epidemic. When eighth lord or eighth house or a disease-inflicting planet joins the combination, it may effect death. 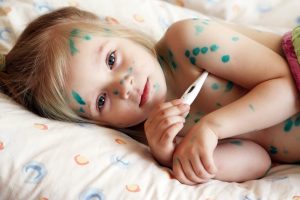 I am giving below some combinations for the same :—

Lagna–Mithuna ; Jupiter in Mesha ; Moon in Brisha ; Ketu in Mithuna ; Saturn in Karkata ; Venus in Brischika ; Sun and Rahu in Dhanu ; Mars in Makara.

This is a case of small pox. 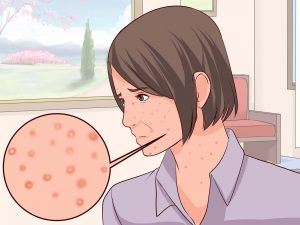 Lagna—Tula ; Jupiter in Brisha ; Ketu in Mithuna ; Saturn in Karkata ; Moon in Simha ; Mars in Kanya ; Mercury and Rahu in Dhanu ; Sun in Makara ; Venus in Kumbha.

This is a case of chicken pox.

In this case also, Mars and Mercury are afflicted, but the affliction is milder. As Saturn is yoga-karaka for Tula lagna, its affliction is not very much harmful. Mercury is a benefic for this lagna and is in house of a natural benefic. Further Venus and second house are not afflicted though the second lord is slightly afflicted.