Tetanus is an infectious disease characterized by tonic spasms  of the muscles with marked exacerbations. Saturn and Moon are karaka for this disease. Moon, in a house of Mars hemmed between Malefics causes tetanus. Moon in house of Mars afflicted by malefics or heavily afflicted Saturn gives rise to this disease. When  Moon and Saturn are heavily afflicted, badly placed, conjoined with evil lords and malefics and are related  with disease inflicting house or planet, they give rise to tetanus.

Lagna—Tula ; Moon in Mesha ; Saturn, Venus and Mars Brisha ; Sun and Mercury in Karkata ; Ketu in Kanya ; Jupiter in Dhanu ; Rahu in Meena.

This is a case of tetanus. 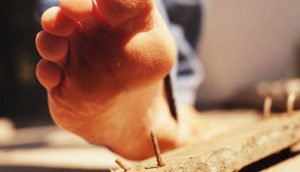 Thus we find the factors ruling this disease are afflicted in this horoscope and are capable producing the disease.