The stomach has been assigned to the fifth house and Simha rasi. Sun is karaka for the same. Affliction of fifth house, lord of fifth house, Simha rasi and Sun give rise to the diseases and troubles concerning stomach. Further, fifth house rules the right side of the stomach along with Simha rasi, while ninth house and Dhanu rasi rule the left side of the same. Saturn and Ketu cause all stomach pains. Saturn produces all diseases from irregular and bad eating, while Ketu produces all diseases from hunger and in-sufficient eating. The disease of the fifth house, that is stomach, is mostly inter-linked with diseases connecting bowels which is governed by the sixth house and Kanya rasi. We shall now discuss many diseases concerning fifth and sixth houses. 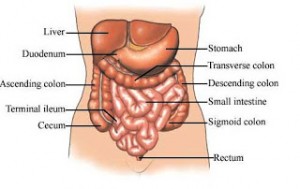 Spleen is situated in the left side of stomach. Ninth house and Dhanu rasi govern the same. Jupiter is karaka for spleen. Simha rasi, fifth house of natural zodiac, has also its ruling over the spleen. Spleen diseases may be of many kinds, such as, rapture of spleen, tuberculosis of spleen, abscess, tumour etc. To produce tuberculosis of spleen, affliction or association of Rahu with the houses and planets ruling same and malefic influences over the same are necessary. To produce tumour, abscess or rapture, affliction of Mars in similar way is necessary. Rahu’s affliction also causes enlargement of spleen. The function of this organ is to produce certain modifications in the blood of most vertebrates, situated on mammals at left of stomach. As we find the function of the spleen has something to do with blood, Moon is a planet also to be taken into consideration. Thus we find, when Simha rasi, Dhanu rasi, ninth house, Jupiter and Moon are afflicted and are in some way related with sixth house or lord of sixth house or with any disease inflicting house or planet, they may give rise to diseases concerning spleen. As Sun is karaka for all stomach diseases, position and strength of this planet is also to be considered.

I am giving below some combinations for this disease, which should be applied considering whether the planets are malefics or benefices for the horoscope in question :—

Lagna—Brischika ; Jupiter in Mesha ; Mars and Rahu in Brisha ; Sun and Moon in Simha ; Venus and Mercury in Kanya ; Saturn and Ketu in Brischika.

This is a case of Spleen disease of worst type. The person ultimately died from the same.
The reasons for the disease are :—

Thus we find many factors to give rise to disease of spleen are present in this horoscope. Another point is to be noted that Sun and Moon are in Simha rasi being aspected by strong malefics Mars and Saturn, which suggest tuberculosis.