Liver is the large glandular organ in vertebrate secreting bile and purifying venous blood. There are many kinds of diseases concerning liver, such as jaundice, cirrhosis of the liver, cancer of liver, tuberculosis of liver, abscess of liver etc. The fifth house rules the same. Simha rasi is the seat of liver in natural zodiac. Jupiter is karaka for the same. Sun and Mars are the planets who govern biles. Moon is the ruler of blood. When Simha rasi, fifth house, lord of fifth house, Jupiter, Moon, Sun and Mars are afflicted, badly placed and make some relation with disease inflicting house or planet, they suggest liver troubles. As Sun is also the karaka for stomach, his situation, strength etc are important for the diseases of liver. Mars is the planet which produces abscess and affliction of fifth house by malefic Mars or some connection of Mars with fifth house or lord of fifth house or karaka planets being afflicted may produce liver abscess. Rahu’s affliction in similar way is responsible for tuberculosis of liver. When all the malefic planets afflict the houses and karakas ruling liver and be related with disease inflicting house or planet, they may give rise to cancer of liver. 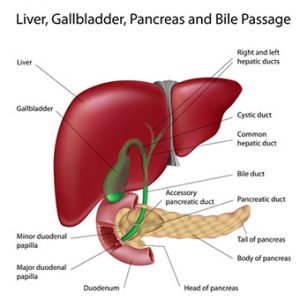 I am giving below some of the combinations ruling liver diseases :—

Lagna—Makara ; Venus and Mercury in Mesha : Sun, Mars and Rahu in Brisha ; Moon and Saturn in Simha ; Ketu in Brischika ; Jupiter in Kumbha.

This is case of liver disease. The person suffered many times from serious diseases concerning liver.
The reasons for the same are :—

Thus we find the houses and planets ruling the diseases concerning liver are afflicted in this horoscope and are competent to give rise to the diseases of liver.