Filaria is a disease generally caused by parasite called filaria boncrofti carried by infected culex mosquito. Infection of blood is an important factor in this disease. The watery signs Karkata, Brischika and Meena rasis rule the blood along with fourth, eighth and twelfth houses. When the above rasis and houses, lords of fourth, eighth and twelfth houses and karaka Mars are afflicted, badly situated, conjoined with or aspected by evil lords and by malefics and are in some way related with disease inflicting house or planet, they give rise to the disease of filaria. Rahu is an important planet for this disease and when the above houses, their lords and Mars be afflicted by Rahu by conjunction or aspect, it produces the similar disease. Fourth house is an important factor in ruling this disease and while judging the disease of filaria, the fourth house and its lord should be taken into consideration . When fourth house is afflicted by malefics and also by Mars, they also add to this disease. 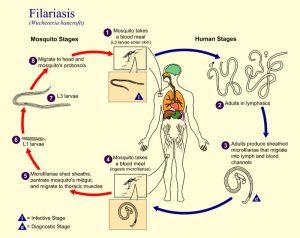 Lagna—Simha ; Venus in Brisha I Jupiter in Mithuna ; Sun and Mercury in Karkata ; Saturn and Ketu in Kanya ; Moon in Brischika ; Mars and Rahu Meena .

This is a case of filaria.

Thus it is seen, the houses and planets ruling filaria are heavily afflicted in this horoscope.