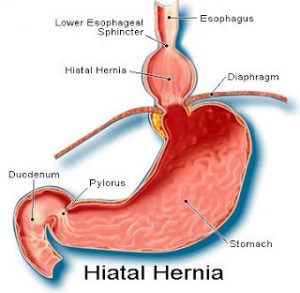 Lagna—Mesha ; Mars in Brisha ; Ketu in Karkata ; Jupiter in Simha ; Saturn in Brischika ; Sun in Dhanu ; Moon, Rahu and Mercury in Makara ; Venus in Kumbha.

This is a case of strangulated hernia.
The reasons for the same are :—

In this horoscope, though Tula Rasi, which is also seventh house from lagna, is not afflicted, the other factors are stronger and are capable of inflicting the disease of hernia. He suffered from the disease when Saturn was transiting through Tula rasi and Rahu was transiting over his radical Moon.

This is also a case of piles. The reasons for the same are—Brischika rasi, which is also eighth house from lagna, is conjoined with malefic Saturn and is aspected by Mars. Seventh and eighth houses from Sun and Moon are also afflicted in this horoscope.

Lagna-Kumbha ; Sun , Mars, Venus and Rahu in Simha ; Mercury, and Saturn in Kanya ; Moon and Jupiter in Tula ; Ketu in Kumbha.

This is a female horoscope suffering from tumours in uterus.
The reasons for the same are:–

Thus we find the factors ruling the diseases in female organs are afflicted and are capable of producing tumours in uterus.

Lagna-Kanya; Rahu and Saturn in Kanya; Sun, Moon, Mercury and Jupiter in Tula; Venus R in Brischika; Mars in Makara; Ketu in Meena.

This is a case of disease in ovaries and uterus. She underwent an operation when Saturn was transiting through Tula rasi and Rahu through Makara rasi, in her Jupiter dasa in antardasa of Venus.

The reason for  the disease are :–

Thus, it can be seen that all the houses and planets ruling uterus and ovaries are heavily afflicted. Further all the planets have formed kala-sarpa yoga.